The Ngorongoro Conservation Area came about when the British government separated the Serengeti southern part, as this area was part of Serengeti National Park when it was established in 1951. The Maasai who occupied the whole area of Serengeti park vacated south to the green land of Ngorongoro highlands and leave the Serengeti Park with no human activities other than tourism.

Established in 1959, Ngorongoro Conservation Area has an area of 8,290 sq km. It is called a Conservation Area and not a park as this “park” conserves wildlife, domestic animals and human activities (the Maasai).

The Ngorongoro Conservation Area has two entrances; Naabi Hill Gate, the one that borders Serengeti Park and second, Loduare Gate, from Karatu town. The payments are done in Us dollars but they don’t accept cash. Only online payments like Visa Card are accepted.

There are various attractions in the conservation such as Maasai life, craters, wildlife, Olduvai Gorge, shifting sand, equatorial forest, just to list a few.
Apart from Ngorongoro crater, there are other 2 craters: Empakai and Olmoti craters, where walking safari can be done with armed rangers.

The Ngorongoro caldera, famously known as Ngorongoro crater, has a diameter range from 19-21 km and deepness of about 610m. The area size inside is 232 sq km and at its rim is 304 sq km.

This caldera came as a result of volcanic activities that happened nearly 3 million years ago. A mountain of about 4500m to 6000m above the sea level exploded a large volcano, causing weak mountain walls, hence collapsed on itself. This small area comprises of savanna, forest, mountains, lake, rivers, swamps, spring which all make this area beautiful and attractive apart from doing game drive.

The caldera has 2 entrances and 2 exits which are safe in all weather. It is recommended for drivers to engage four wheel drive while ascending and descending as the roads are steep. A 5 -7 hours Ngorongoro crater safari is just super to see everything, but mostly depend on your luck.

Animals can migrate in and out of the caldera through the slanted walls during the dry season if there is scarcity of food. Almost all animals are found inside the caldera except the cheetah and giraffes. The habitat isn’t good for cheetahs and for the giraffes, they cant descend the steep walls due to their center of gravity being high. Black Rhinos can be seen here. 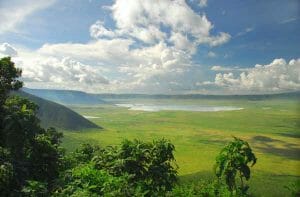 A view of Ngorongoro Crater

How to Get there
Flight to Manyara then transfer to Ngorongoro by vehicle.

All these itineraries can be tailor made to luxury, budget or mid range.